These transfers are one of the many ways that ICE—operating under the authority of the Biden administration and the Department of Homeland Security—exerts its power over immigrants who are already in vulnerable situations that compromise their ability to fight their cases. While these unacceptable transfers cannot be undone, repair can be made. Envision Freedom Fund demands the following: 1) For ICE and Orange County Correctional Facility to immediately release all transferred people to their communities. At a minimum, those who have already been transferred should return to the jurisdiction that most benefits their pending immigration case. 2) An immediate halt to all ICE transfers in progress or future transfers from OCCF. 3) ICE must share the location of those who have been transferred with their advocates and loved ones immediately. They must create and facilitate a swift process for attorneys to file release requests on behalf of those they represent.

“We are appalled at ICE’s total lack of transparency and consistent determination to separate immigrants from their loved ones,” said Tania Mattos, director of advocacy and policy at Envision Freedom Fund. “Rather than facing the public outcry to release those inside Orange County, ICE cowardly chose to work in the shadows of their unchecked power and transfer immigrant New Yorkers away from their support systems. But the fight is not over and we will not let ICE transfer people without exposing behind-closed-doors actions. We demand that ICE immediately stop all transfers, and instead, release folks back into their communities.”

“While we might not experience these changes directly in New York State, the consequences of this decision will reverberate through communities far and wide,” said Carl Hamad-Lipscombe, executive director of Envision Freedom Fund. “There is no doubt that the criminalization of reproductive care will have an outsized impact on low-income people of color, whose lives and freedom are routinely at the mercy of state and federal authorities.”

“Our deepest condolences go out to the families who are grieving the unnecessary, heartless deaths of their loved ones while in Department of Correction custody at Rikers Island,” said Carl Hamad-Lipscombe, executive director at Envision Freedom Fund. “To knowingly send human beings to an institution that is averaging more than one death per month is unconscionable. The inhumane conditions at Rikers are endemic to the jail itself and the criminal legal system as a whole. Another committee, another report, or a federal takeover won’t save lives or keep our communities safe—we need releases and we need them now.”

Thanks to leadership by Senator Bailey and Assemblymember Epstein and vigorous advocacy by the Break the Shackles coalition—composed of organizations, advocates, and directly impacted immigrants and anchored by African Communities Together and the Envision Freedom Fund— New York is the first state in the nation to pass legislation that will address the for-profit bond industry’s exploitative business model and abusive practices toward immigrants.

Significant and concerning trends in the implementation of bail reform in New York State, including rising rates of pretrial incarceration, are likely to continue—if not worsen—as the state’s bail reform laws are rolled back a second time. Click here to read and download the report.

“It’s clear lawmakers are exploiting legitimate public concern and a shared desire for safety to completely gut bail reform, which they agree has not contributed to incidents of violence. We need them to think of their constituents in arraignment courts, at Rikers, in county jails across the state; people like Kalief Browder, Layleen Polanco, George Pagan and many others who have lost their lives because of bail and pretrial detention.”

Governor Hochul’s proposals are short-sighted, irresponsible, and contradicted by every piece of evidence reported about the impact of bail and pretrial detention on violence and crime rates. Senate Majority Leader Andrea Stewart-Cousins, Assembly Speaker Carl Heastie and other lawmakers must continue to stand against these baseless attacks on policies that protect the rights of Black, brown, low-income, and immigrant New Yorkers.

Faced with rising numbers of immigrants being detained and deported since taking office, President Biden is attempting to fulfill his promise to reform this country’s immigration system by relying on a rapid ramp-up of “alternatives to detention.” Ending immigration detention cannot include substituting a physical cage for a virtual one.

“A hunger strike is a political act and an extremely personal one—that’s what makes it so powerful. The people on hunger strike at OCJ are jeopardizing their health and safety to show us that medical neglect, abusive treatment, and deplorable conditions are the status quo and that it cannot continue. The jail and ICE must meet the hunger strikers’ immediate demands and New York State must pass the Dignity Not Detention Act so that we can make ICE detention a thing of the past,” said Tania Mattos, director of advocacy and policy at Envision Freedom Fund.

While Manhattan DA Bragg’s original policies were lacking, they reflected a commitment to the campaign platform on which he was elected. Bragg’s capitulation to New York City Mayor Eric Adams and the NYPD demonstrates the influence of fear mongering propaganda and the long-standing connection between prosecutors and police that exists in New York City and across the country.

A meeting between President Biden and Mayor Eric Adams is likely to produce a string of photo-ops and conversations about ending violence dominated by the usual law enforcement talking points. Envision Freedom Fund is calling for a different conversation.

Violence can only be addressed by investing in what both research and common sense tells us works: healthcare, affordable housing, jobs, education, and vital services for those most in need. Envision Freedom Fund will continue to advocate for real investment in solutions that will make our communities whole, healthy, and safe.

BCBF—a leading voice in the movement to end money bail and pretrial detention in New York, an influential advocate for an end to immigration detention, and home of the country’s largest immigration bond fund—changed its name to Envision Freedom Fund. The new name captures the full scope of the organization’s work and visionary mission: freedom for all people.

Jails have always been—and will continue to be—sites of violence, trauma, and death. Yet, the number of people jailed continues to skyrocket. Every 30 minutes in New York City, someone is jailed, often because they cannot afford their bail. The only way to end the abuse and violence of incarceration is to free people now.

BCBF Calls for Rapid Decarceration Amid Crisis in NYC Jails

Anything short of decarceration, especially during the current public health and humanitarian crisis behind bars, would demonstrate a lack of commitment to the freedom, safety, and dignity of New Yorkers. The New York City Council should be taking every step possible to reduce the number of people jailed immediately.

New York City invests millions of dollars into prosecution, yet district attorney offices are purposefully opaque about their decision-making and the scope of harm they inflict on communities of color.

As deportations under the Biden administration continue, is Biden unwilling or unable to control the Department of Homeland Security?

When New Yorkers rose up in the wake of George Floyd’s murder, an influx of donations made it possible for BCBF to distribute $4.6 million to support bail for demonstrators and to support Black-led collectives, organizations, and organizers in New York State.

Criminal justice reformers are rethinking the crusade against cash bail.

We need further decarceration. Instead, Governor Cuomo and state lawmakers—in their zeal to lock human beings in cages— pushed through a backroom deal to expand pretrial jailing so thousands more New Yorkers will be subjected to imprisonment and unspeakable harm.

More than 100 pro-bail reform groups promised to stand in “opposition to any changes” to New York’s new bail laws, arguing in a letter sent Tuesday to Gov. Cuomo and state leaders that judges shouldn’t try to predict someone’s “dangerousness” as a rationale to detain them.

Despite headlines, the state’s cash bail reforms are having a positive impact on the people they are meant to help.

More New Yorkers Are Stepping Up To Bail Out Detained Immigrants

In the New York-New Jersey area there are thousands of immigrants sitting in detention and on any given day and only 12 percent of those individuals will actually get bond granted by an immigration judge. Often the bond amount is so high that it’s simply unaffordable for most immigrant families

At the end of 2019, we ceased operating as a revolving bail fund. So what’s next for the Brooklyn Community Bail Fund? We see this year’s bail reform legislation as a beginning, not the end.

The Fax Is Not Yet Obsolete

A broken fax machine could mean spending another night in jail, even after paying bail. In these cases, the fax shouldn’t die because it’s old-fashioned or retrograde, but because people’s safety and comfort, and even their lives, still rely on a sheet of paper inching out of a machine, awaiting notice.

Court watchers rallied outside of Manhattan Criminal Court to call attention to their report arguing that despite new policies for marijuana prosecution in Manhattan and Brooklyn, the system is still racist.

New York City’s bail bondsmen operate almost entirely without regulation, and often without licenses or scrutiny of their services, which are frequently punitively expensive

Every year, thousands of innocent people are sent to jail because they can’t afford to post bail, putting them at risk of losing their jobs, custody of their children — even their lives. 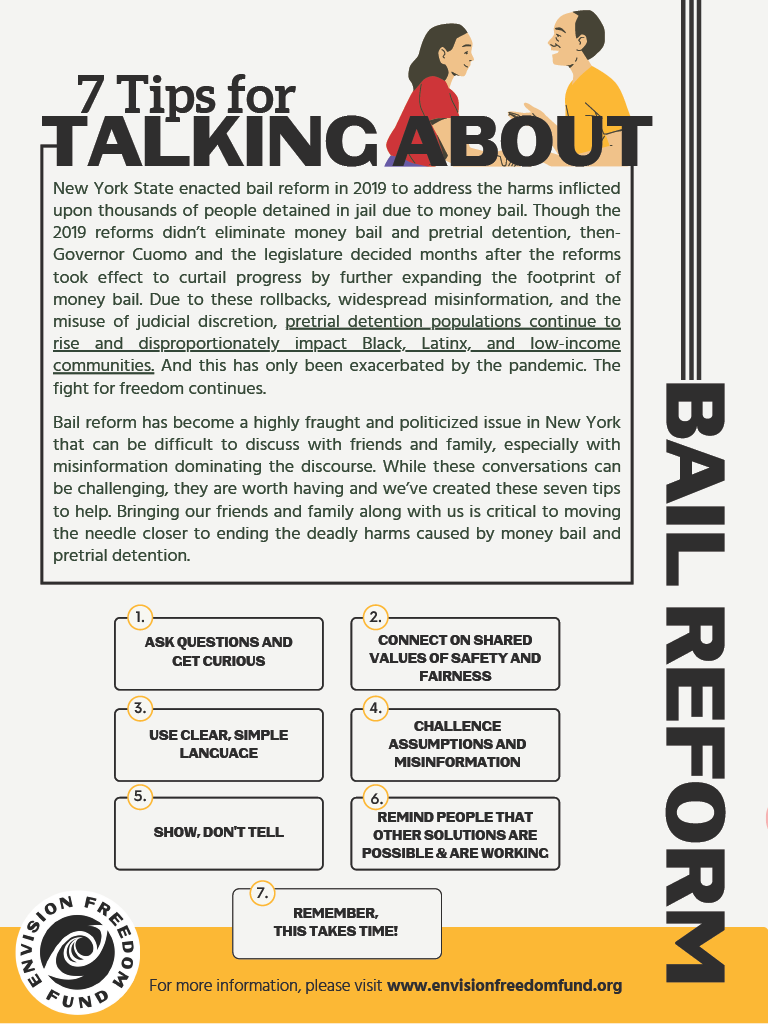 7 Tips for Talking About Bail Reform

Discussing the highly politicized issue of bail reform with friends and family can be challenging, but these conversations are critical to moving the needle closer to ending the serious harms caused by bail and pretrial jailing. These seven tips can help you have productive, informed conversations!
November 2022
Click to Download 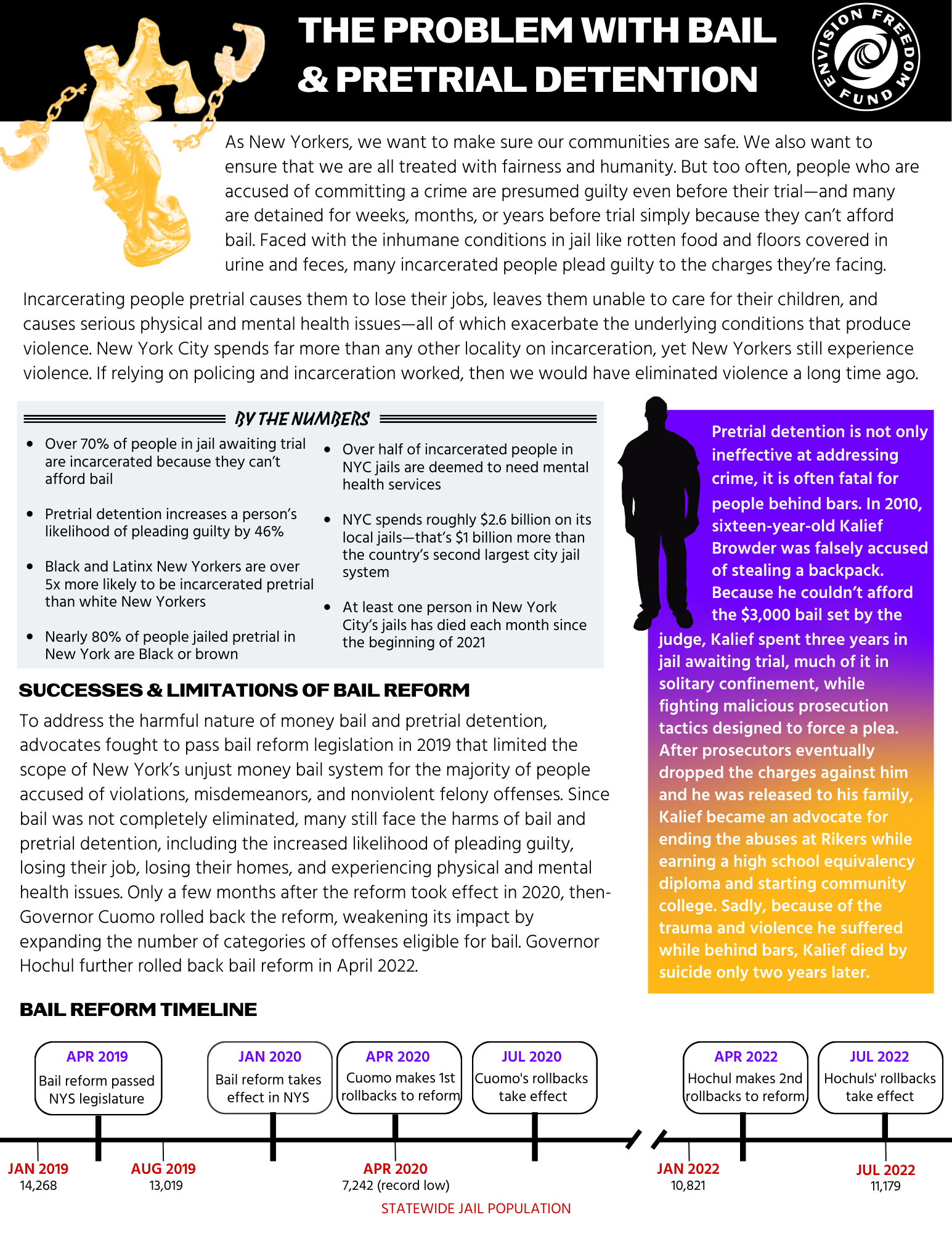 The Problem with Bail & Pretrial Detention

Incarcerating people pretrial causes them to lose their jobs, leaves them unable to care for their children, and causes serious physical and mental health issues—all of which exacerbate the underlying conditions that produce violence.
September 2022
Click to Download 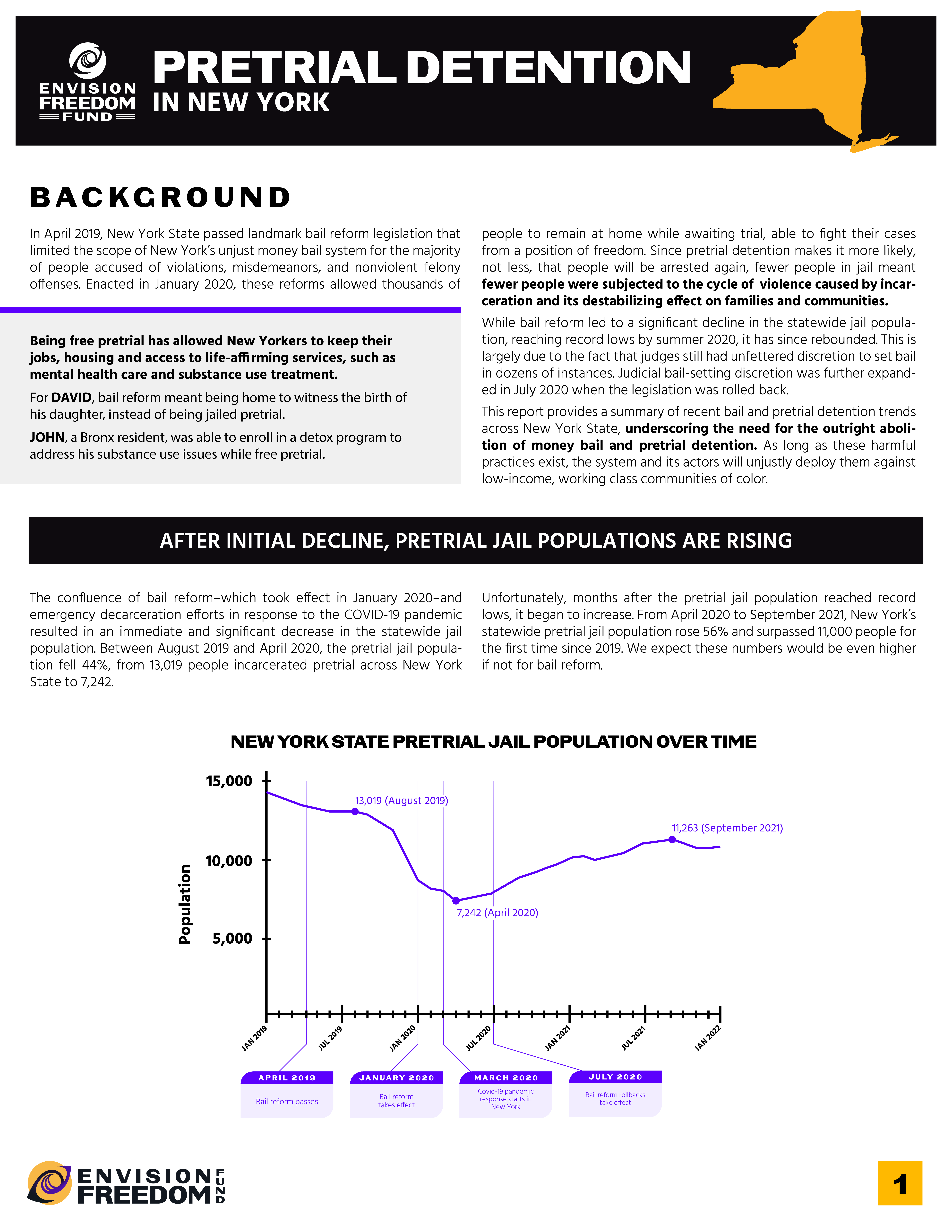 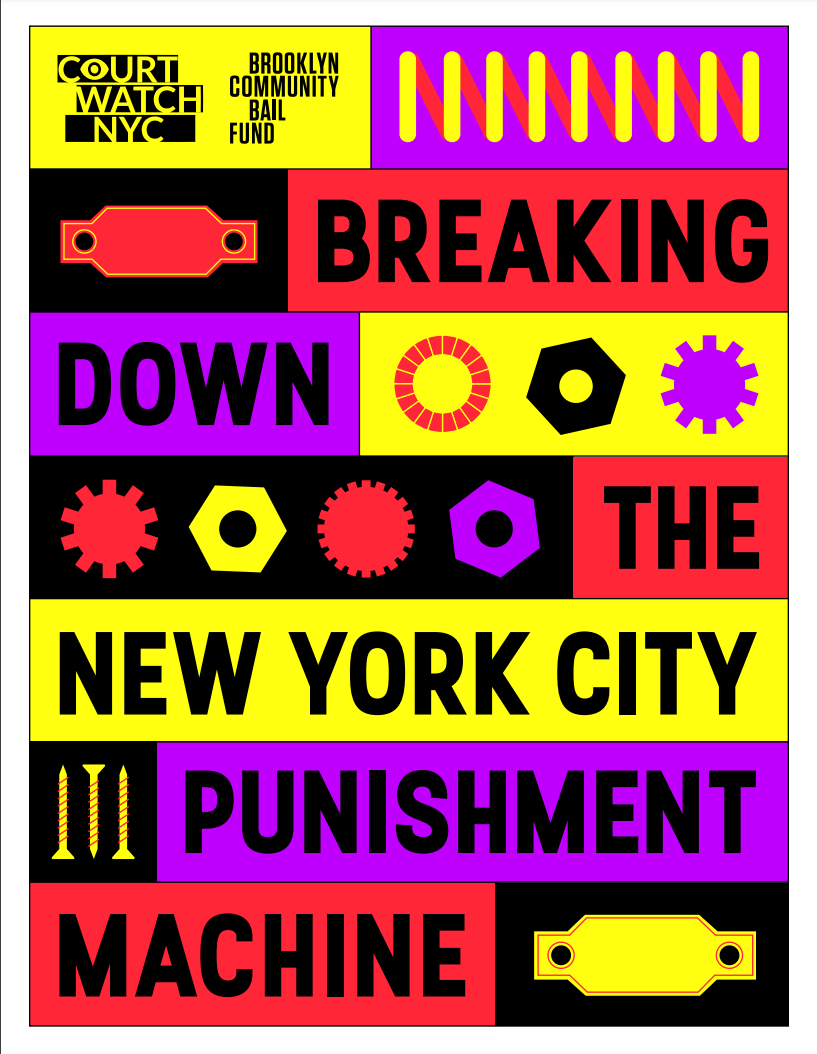 Court Watch NYC’s newest zine, which provides an introduction to NYC’s local prosecutors and judges – their power and influence within the larger criminal punishment system – and how to join CWNYC’s work and local organizing around NYC’s prosecutors.
August 2021
Click to Download 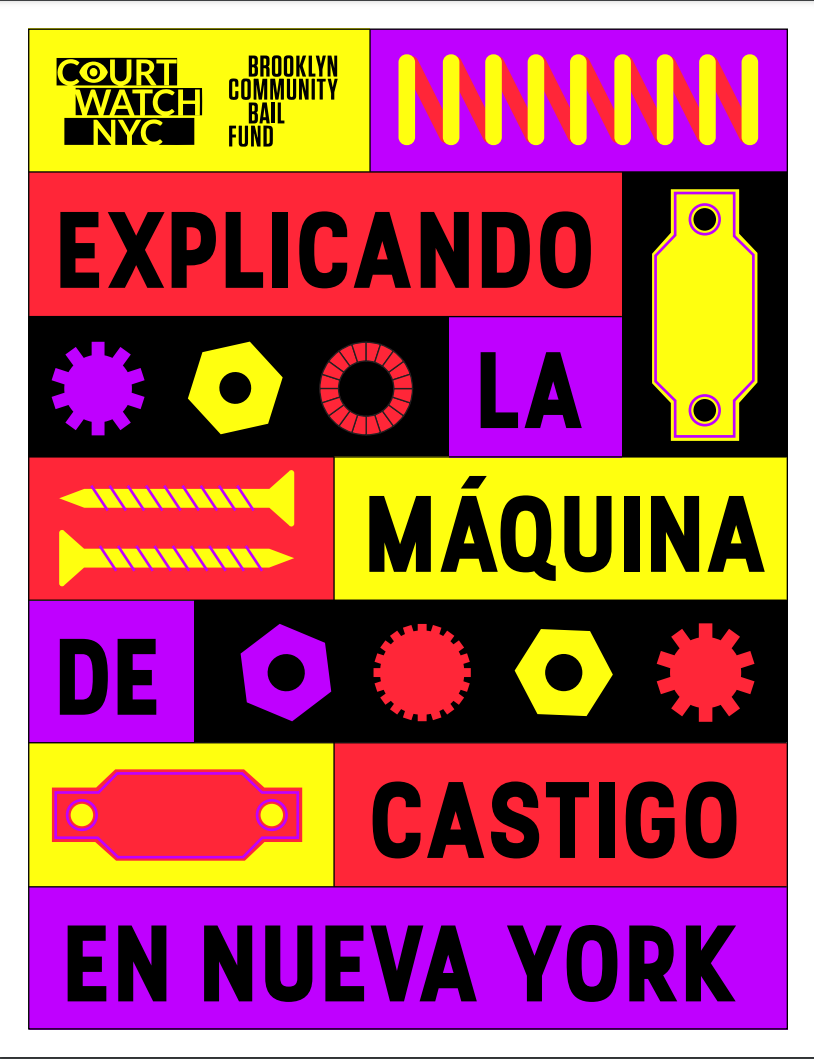 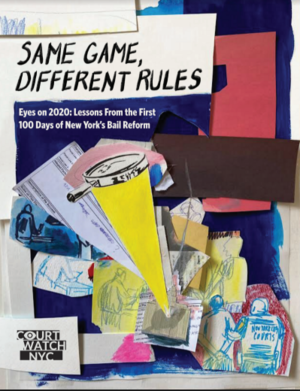 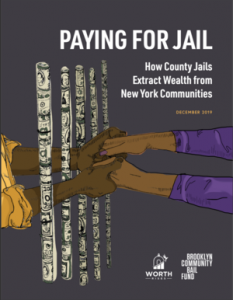 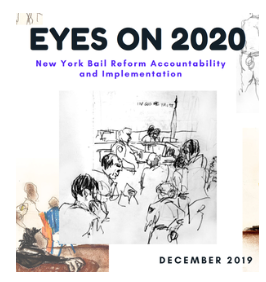 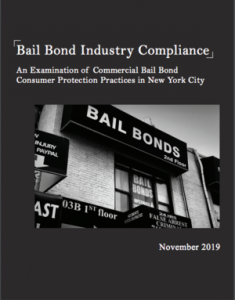 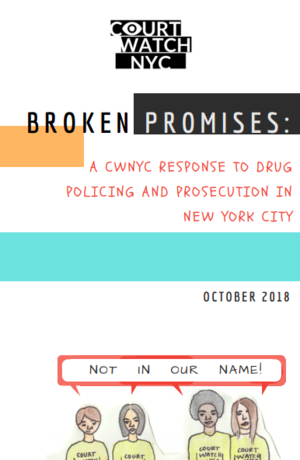 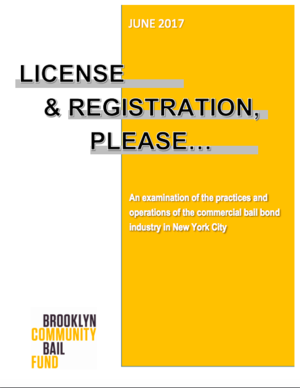 In partnership with the Center for Urban Pedagogy, we created a “know-your-rights” booklet, available in English and Spanish, to help New Yorkers navigate the bail payment system in New York State to avoid further harm.